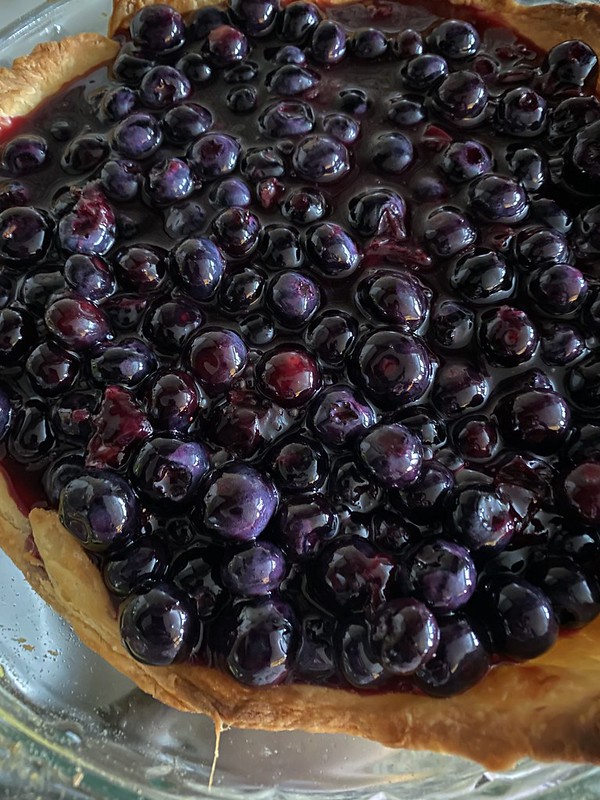 I’m not sure why I was determined to make a pie for Pi Day. We never did anything for Pi Day before, although they do talk about it in school. For whatever reason, I had it in my head that I would make a blueberry pie.

In Singapore, there was a little local bakery that my mom would take us. I have no idea its name, but it was near the library, or at least that’s how it is in my memory. And they had blueberry pie. Which is unusual, as it’s not exactly a dessert that was common in Singapore at that time. I’m sure blueberries were really expensive then – and they still might be? Singapore imports a lot of fruits and vegetables as there’s little space for farming.

But somehow I remember that pie.

And I wanted to make one.

I found this recipe on Food52 by Rose Levy Bernabaum. I am a fan of Bernabaum’s Bread Bible, and have loved everything I’ve made in that book, especially the scones, which are my go-to scone recipe. I always double that recipe so I have extra to store in the freezer.

The one thing I wasn’t so sure was the measurements. The recipe used cups which personally I detest. I feel like baking recipes should always provide weights which are far more accurate than cups. And usually, I would stay far away from a cups-only recipe. But this one sounded really good. The filling isn’t baked, just 1/4 of the berries are cooked, then the rest are mixed together with the syrupy cooked ones.

Well, unfortunately, somehow I got myself tripped up on the measurements and ended up using twice the amount of butter! I only realised it the next day when I put it into the oven to bake and the pastry started melting! Sigh…

I scraped it into the compost bin after it cooled and started over. But I didn’t have the time to work on the same dough so I just quickly went with this one by Smitten Kitchen. I let it rest for a while in the fridge, not as long as I wanted to, and then rolled it out and baked it. The dough shrank in some parts. Sadness.

It may be because of my glass pie dish. I have since ordered a metal dish so I’m hoping that will see some improvement?

The blueberries though were simple and delicious. A quarter of them are cooked in water, then some cornstarch solution and sugar are added. Then it’s mixed with the rest of the blueberries. Once the pie crust has cooled a few minutes, just pour in the blueberries. They need to set for at least two hours. I loved how the blueberries were mostly intact and they were juicy and plump. Although my dough didn’t look great, it was still tasty.

My 7yo, who’s probably my harshest critic who refused to eat the mixed berry muffins we made last week, declared it delicious and ate it again for breakfast the next day.